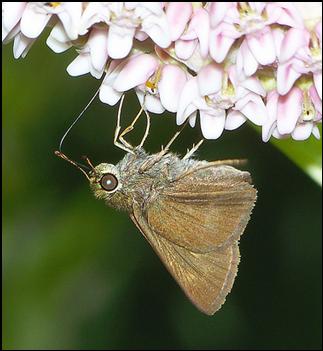 French lepidopterist J. B. A. Boisduval was the first to describe and name this skipper, from a California specimen.  But Thaddeus W. Harris, working in Massachusetts, was not certain that his specimen was identical to that described as vestris by Boisduval.  Harris named his Hesperia metacomet, after Metacomet, the Wampanoag chief, son of Massasoit, also called King Philip, who led the infamous uprising against the English colonists in 1675-6.  Scudder, although recognizing that Boiduval’s 1852 description did fit the local species, adopted Harris’ name, calling it Euphyes metacomet.  Today, our dark eastern form of Dun Skipper is designated sub-species Euphyes vestris metacomet (T. Harris, 1862); its type locality is "Massachusetts" (Pelham 2008). Several of Harris' "type specimens" are in the Harvard MCZ.

Unlike its Indian namesake, Dun Skipper is rather inconspicuous. But it is the most successful member of the sedge-feeding Euphyes genus in our area, embracing a wider range of habitats and host plants than just the bogs, fens and marshes used by the Two-spotted, the Dion and the Black Dash skippers.  In habitat and flight time it has more in common with Northern Broken-Dash and Little Glassywing, being the third of this successful trio of July-flying single-brooded skippers. Opler and Krizek (1984) term it the Sedge Witch.

Dun Skipper has a large range, covering the whole of the east coast from Florida to southern Maine, across Canada and through the mid-west to Colorado, with a disjunct population on the northern west coast in the United States and Canada.

The earliest known Massachusetts specimens are three collected in Cambridge, Massachusetts on 10 July 1833 by Thaddeus Harris (Harris Collection, Index, MCZ). These are marked "Types" in his collection.  Two other Harris' specimens in the Types Collection are from New Hampshire (Dublin, 1835, sent to Harris by Leonard, according to his Index). It appears that the actual type locality for metacomet should be both Massachusetts and New Hampshire.

In late 19th century Massachusetts, Scudder found that Dun Skipper was common and widespread, having been collected “even in such elevated places as Amherst (Parker), and Mount Tom (Dimmock)," and that south of 43º latitude (southern New Hampshire) it was "found everywhere, always rather common and sometimes, as in Nantucket, abundant” (1889:1741-2).  Dun Skipper no doubt benefited from the land clearing that took place as agriculture spread 1600-1850 (Table 1), even if some wetlands were destroyed.

On the islands, Jones and Kimball (1943) reported that Dun Skipper was "general and common" on Nantucket (as Scudder had said earlier), and  "general in distribution, sometimes in swarms at Aesclepias flowers" on Martha's Vineyard.  For Nantucket, four specimens are in the Kimball Collection in the Maria Mitchell Museum on the island, and a 1945 C. P. Kimball specimen is in the MCZ.  For the Vineyard, an F. M. Jones specimen (7/15, presumably 1930's)  is in the Yale Peabody Museum.

It is amazing and unfortunate that the exact host plant used by Dun Skipper in Massachusetts is not known. However, the Connecticut Atlas found an egg or larva on sedge (Carex stricta) and on panic grass (Panicum spp.) in the wild, so perhaps these are the hosts in Massachusetts as well.  In most of the literature, various sedges are listed as the sole host plants; Scott (1986), for example, lists several sedge species, of which only Carex lacustris occurs in Massachusetts.  Dun Skipper is commonly raised on yellow nut sedge (Cyperus esculentus) in the lab (e.g. Heitzman 1964), and it may use that widespread native sedge in nature as well.  Several authors (Layberry et al 1998; Cech 2005) speculate that given the Dun Skipper’s abundance and varying habitats in eastern North America, it is likely using some grass species as well as sedges.  Purpletop (Tridens flavus) has been reported for the Philadelphia area (Shapiro 1966) and for western North America, and now Panicum is reported for Connecticut.  Field research in Massachusetts is needed.

Although the Dun is associated with wetlands and wetland edges, and apparently uses mainly sedges as host plants, it moves readily to adjacent uplands, including some disturbed areas and successional habitats such as roadsides, utility corridors, and gardens, where there are nectar sources. Some sources (O’Donnell et al. 2007) also stress woodland edges; Mello and Hanson (2004:65) report salt marsh edges on Cape Cod. Scudder (1889: 1742) observes that Dun was “…particularly attracted by the flowers of mint, fireweed and Indian hemp.”  Other commonly-used nectar sources are milkweeds, purple vetch, New Jersey tea, knapweed, and self-heal.

MBC sight records 2000-2007 rank Dun Skipper as “Uncommon-to-Common”, but it is the third most abundant native grass skipper, after Peck’s Skipper and Least Skipper (Table 5). (European Skipper is introduced.)  Dun is much more common than the related sedge-feeder, Black Dash. Scudder found this species common, and it remains so today. The Atlas found it in 142 out of 723 blocks, and called it “common.”

MBC sight records 1992-2009 do not suggest any pattern of increase or decrease in the numbers, but rather fluctuations every few years (Chart 107).  Similarly, list-length analysis of MBC 1992-2010 data did not show any significant change in the detectibility of Dun Skipper over these years (Breed et al. 2012).  This seems to have been a fairly stable species. In Connecticut Dun Skipper is perhaps even more abundant than here. The Connecticut Atlas comments that “It is probably the most frequently encountered skipper in yards, especially in wooded regions.” There is even a suggestion of population increase in that state, with 188 project specimens compared to 111 pre-project.

Dun Skipper was found in 190 of a possible 351 towns in Massachusetts between 1991 and 2013 (Map 107).  Dun Skipper is well distributed across the whole state. It probably could be found in every town; white areas on the map are simply areas where searches have not been made. Dun Skipper is reported from all NABA Counts around the state.  BOM-MBC records accord with the 1986-90 Atlas finding of Dun’s wide distribution over the state, “including at the highest elevations.” 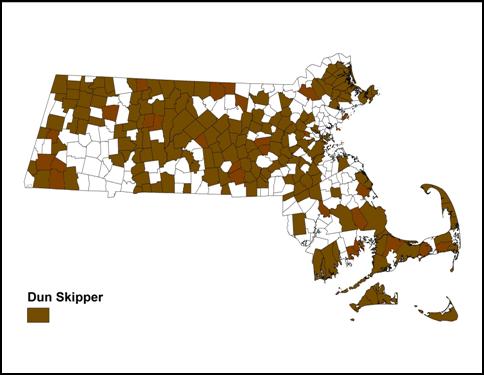 BOM-MBC has several Dun Skipper records from Nantucket, the latest being 2 at Tuckernuck 7/2/2011, M. Pelikan, and "present on the island" 2011, E. LoPresti. The Atlas also had two Nantucket records. Scudder (1889) had reported it as “abundant” there.  The Atlas also had two records from Naushon Island (town: Gosnold) (Mello 1988), and one from Thompson Island (town: Boston).

Other locations with notable numbers are

Dun Skipper apparently has one long brood, flying, according to MBC 1993-2008 records, from late May (a few) to the third week in September. It peaks and becomes abundant during the last three weeks in July (http://www.naba.org/chapters/nabambc/flight-dates-chart.asp).

Over a century ago, Scudder wrote that Dun Skipper “generally appears on the wing during the very last days of June, occasionally as early as the 22d , becomes abundant in early July, is generally rubbed ---at least this is true of the male---by the middle of July, and continues in scanty numbers until the middle, occasionally as late as the third week of August” (1889:1742) (emphasis added).

The onset of the flight period would appear to have advanced significantly since Scudder. As with Northern Broken-Dash and Little Glassywing, there are now a few sightings occurring as early as May, rather than June.  And in eight of the 23 years 1991-2013, the earliest report of Dun Skipper came prior to Scudder's June 22 date.

The flight period appears to be lengthening in comparison to Scudder’s report that Dun Skipper was occasionally seen as late as the third week of August. In ten out of the 23 years under review, the last sighting was reported in September rather than August. This pattern of flight extension into September is also seen in the records for Long Dash and Northern Broken-Dash, but not for Little Glassywing. For Long Dash, the later flights indicate an additional brood; whether this is the case for Northern Broken-Dash and Dun is uncertain.

Like Northern Broken-Dash and to a lesser extent Little Glassywing, Dun Skipper is wide-ranging and adaptable. Cech (2005) remarks that “No other Euphyes is as broadly adaptable or widespread.”  NatureServe (2010) ranks it as S5 or “secure” in Massachusetts and Connecticut.

As climate warms, this species may be expected to do increasingly well in Massachusetts (Table 6).  As far back as the 1960’s, Shapiro (1966) reported two broods in the Philadelphia area, and Heitzman (1964) in the midwest north to Iowa. In the southeastern states it has two, and at least three in Florida. This species might adapt to major climate warming by increasing the number of broods.