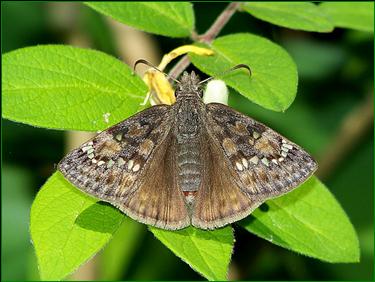 Juvenal’s Duskywing and Horace’s Duskywing are our two larger duskywings.  Juvenal’s is the most common, and its range extends further northward than Horace’s, well into upstate New York and southern Vermont, New Hampshire and Maine, whereas Horace’s barely reaches into New Hampshire. Juvenal’s is normally univoltine, but Horace’s has at least two broods here.

Juvenal’s, Horace’s, Mottled (E. martialis), Columbine (E. lucilius), and Persius (E. persius) Duskywings are all named after Roman poets, a convention started by Fabricius when naming juvenalis and followed by Scudder or Scudder and Burgess in naming the other species (Zirlin 1993).  The Wild Indigo Duskywing (E. baptisiae), separated out as a species many years later in the 1930’s, is quite helpfully named for its host plant.

Juvenal’s Duskywing was one of the earliest North American butterflies to be described.  It was well known to 19th century lepidopterists, and apparently quite common in most of Massachusetts in the late 19th century. The earliest known specimen is from Thaddeus Harris' Boston area collection, dated May 10,1820 (Index; Harris Collection MCZ).  Charles Maynard (1886), an enthusiastic teacher and naturalist who lived in Newton, wrote that Juvenal’s was “common in southern and middle New England,” and that “This is one of our best known Skippers, appearing in great numbers in July, frequenting roads in woodlands. They are fond of alighting in sunny places on the ground, but are constantly on the alert, instantly flying when approached too closely.”

Prior to European settlement, Juvenal’s Duskywing was no doubt common in dry, sandy scrub oak barrens and oak woods openings.  It probably continued to flourish as land was cleared for agriculture (Table 1).  It appears to thrive in dry, disturbed habitat using young re-growing oaks; interesting early (1876) specimens are from Centre, N.Y. (W. W. Hill), now the Karner pine barrens near Albany (MCZ).   By 1934, Farquhar lists Massachusetts specimens from the towns of Milton, Framingham, Swampscott, Manchester, Lynn, Lynnfield, Stoneham, Phillipston in north-central Massachusetts, and Nantucket, in addition to the locations cited by Scudder.

On the islands F. M. Jones and Charles Kimball reported it "quite common over the eastern half" of Nantucket, and "widely distributed, more abundant in the Plains Area" [now Katama Plains] on Martha's Vineyard (Jones and Kimball 1943).  L. W. Cleveland's 14 May 1939 specimen, and two F. M Jones specimens (n.d.) from the Vineyard are at Yale.  C. P. Kimball specimens from Nantucket are in the Maria Mitchell Museum on the island.

Scudder said “I have found it abundantly on the scrub oak, Quercus ilicifolia, and Riley has found it on white oak…and the chestnut oak...;”  thus he correctly described its host plants, a variety of oaks (1889:1482).  More recently in Massachusetts D. F. Schweitzer has recorded Juvenal’s Duskywing using both red and white oak (MAS 1986-90 Atlas). The Connecticut 1995-1999 Atlas volunteers observed eggs or larvae in the wild on red oak, black oak, and scrub oak (O’Donnell et al., 2007).  It may also use other oak species such as chestnut oak and post oak. All of these oaks occur in Massachusetts.

In the summer of 2009, photographer Sam Jaffe found numerous caterpillars of Juvenal’s Duskywing in the higher, drier areas of the Great Blue Hills south of Boston. He reports that the most common host plant was scrub oak, but that red and scarlet oak were also used.  Final instars were found in late September and October (Jaffe 2009). Juvenal’s overwinters as a late-instar caterpillar, pupating and emerging in the spring.

Like Horace’s Duskywing, Juvenal’s is at home in a variety of dry openings in oak forests: clearings, edges, trails, and roads. Unlike more sensitive barrens habitat species, it seems quite tolerant of disturbance, and uses young, re-growing oaks as well as mature trees. As Cech (2005) puts it, this species is an “adaptable generalist.”

MBC sighting totals 2000-2007 rank Juvenal's Duskywing  as “Uncommon to Common” in relation to truly “Abundant” species such as Cabbage White and “Common” ones like American Copper (Table 5).  Still, it is seen in the highest numbers of any of the duskywings.  Horace's, Sleepy and Dreamy Duskywings all rank as Uncommon, and Wild Indigo is on the low end of Uncommon-to-Common. The 1986-90 MAS Atlas said that Juvenal’s was “common to abundant."

Despite the fluctuations, there is also an overall drift upward over these years, which can be illustrated by linear regression (R²=0.108) of the data.  List-length analysis of these data also show a statistically significant 74.3% increase in the population trend of Juvenal's Duskywing between 1992 and 2010 (Breed, Stichter, Crone 2012).  Horace’s Duskywing showed a smaller, non-significant increase over this period.

The 1986-90 MAS Atlas found Juvenal’s throughout the state, commenting that it was “probably resident in every town.”  BOM-MBC records confirm that distribution, and add new records for many areas.  Between 1991 and 2013 there are records of Juvenal’s in 166 of a possible 351 towns in the state.  Sightings are well-distributed across the state.

Atlas records were “spotty" in northern Worcester County and the Berkshires.  BOM-MBC records indicate that the species is now quite easily found in northern Worcester County:  there are consistent reports from Royalston, Winchendon, Leicester, Hubbardston/Barre Falls Dam, and also from Montague, Shelburne and Whately in Franklin County. At Wachusett Meadow WS in Princeton, records indicate that Juvenal’s Duskywing is “Common” (4-20 individuals found on a trip during the flight period) (MBC Site Guide 2005).

In Berkshire County the species is still uncommon, and BOM-MBC records are few, with very low numbers. The three long-running Berkshire NABA Counts do not report Juvenal's Duskywing because its main flight period has finished before the Counts begin in July.  Small numbers of Juvenal’s have been reported infrequently from such northern and central Berkshire locales as Williamstown 5 on 5/17/2000, P. Weatherbee; Windsor Moran WMA 1 on  6/21/2002, M. Lynch; Adams Greylock Glen 1 on 6/6/2001,  P. Weatherbee; and Mt. Greylock 1 on 6/5/2013 and 1 on 5/20/2001, T. Gagnon et al..  At MAS Pleasant Valley WS in Lenox and at MAS Canoe Meadows WS in Pittsfield, records by Rene Laubach and others indicate that Juvenal’s Duskywing is uncommon to rare (MBC 2005, Site Guide).

Juvenal's Duskywing may be more common in southern Berkshire County: the Atlas had seven records from southern Berkshire towns, from Stockbridge, Sheffield, Mt. Washington and Egremont.  BOM-MBC has one record, 5 on 5/18/2013, Sheffield and Great Barrington, M. Arey and A. Grkovich.

Notable high counts for this species come from

According to 1993-2008 MBC records, Juvenal’s Duskywing flies from the second week in April through the last week in June, with scattered sightings in July and August (Neilsen 2008).

In ten of the 23 years (about half), the first sightings of Juvenal’s occurred in the third week of April or earlier (prior to 4/21).  These ten years of early sightings were all post-1996. The Atlas had reported the earliest flight date during the 1980s as April 23, 1988; many dates today are earlier than that.  Juvenal's Duskywing would be a good candidate for studying  long-term correlation of average flight time with average local spring temperatures, to further specify its apparent responsiveness to ambient temperatures.

A century ago Scudder wrote that in the Boston area Juvenal's Duskywing made its advent "in the first days of May, and was once observed by Miss Guild on April 28th" (1899: 1484).  Today's first flight dates are considerably advanced since then.

Latest flight dates:  In the same 23 years of BOM-MBC data, reliable "last sightings" cannot be determined, because of the difficulty of separating Juvenal's Duskywing and Horace's Duskywing in the field.  Horace's Duskywing has a second brood and flies into August and September. The many reports of "Juvenal's Duskywing" in July and August in BOM-MBC records cannot really be relied upon, but it is also hard to imagine that all of them are Horace's. They at least leave open the possibility that Juvenal's may be flying longer now than in Scudder's day, when they continued  "to fly in faded condition until somewhat past the middle of June" (1899: 1484).